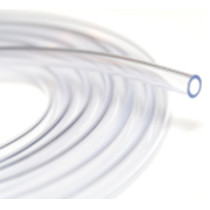 The European Union has lead the way in “phasing out” many hazardous chemicals from consumer products. The vehicle for this legislation is known as REACH.

Most PVC Tubing is NOT REACH Compliant

Flexible PVC tubing, also commonly known as flexible vinyl tubing is used widely in everything from medical devices to soda and beer tubing in restaurants.

PVC tubing is made flexible by adding chemicals known as plasticizers. A phthalate compound known as DEHP remains the most common plasticizer for flexible PVC, with approximately 258 million pounds of DEHP being produced in 1994.

DEHP and Your Health

The amount of DEHP we encounter every day has compelling implications in regards to public health. In a study by the EPA, unusual lung disorders and reduced bile flow in children and infants were attributed to the use of DEHP-containing medical devices. In male rats, various problems with anatomical development of reproductive organs occur as well as decreased testosterone levels and sperm production. Also, prenatal exposure of rats to DEHP resulted in several problems including decreased birth rates and skeletal malformations.

DEHP has been classified by the EPA as class B2, a probable human carcinogen, since 1986.

These cookies are used to track user activity across the Website so TBL Plastics can better target ads.

Any cookies that may not be particularly necessary for the website to function and is used specifically to collect user personal data via analytics, ads, other embedded contents are termed as non-necessary cookies. It is mandatory to procure user consent prior to running these cookies on your website.